Negative Oil Prices, Behind the Headlines 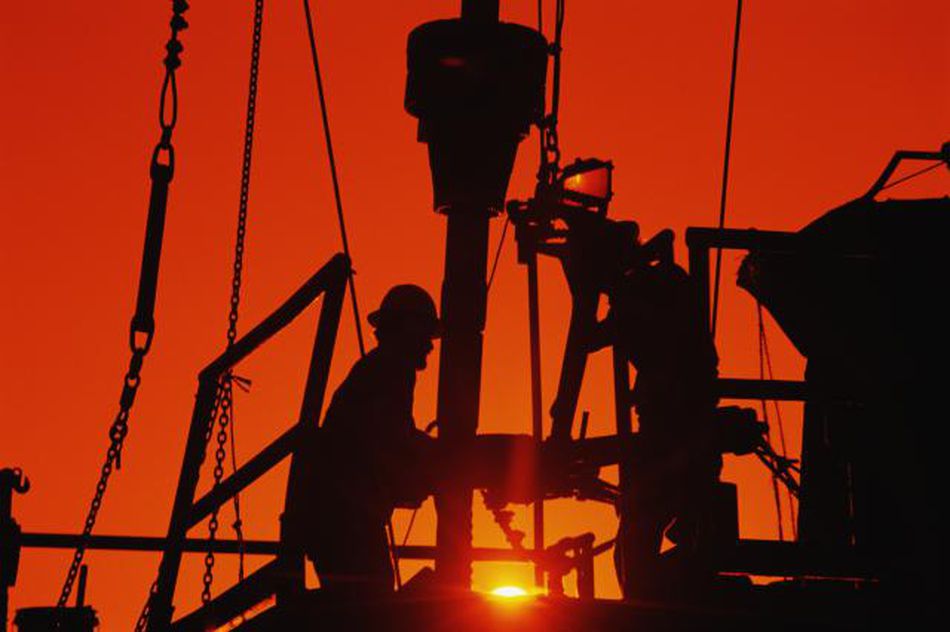 Headlines last week highlighted an unprecedented fall in oil price prices to below zero. Before becoming overly alarmed or excited by this event, there are several nuances that are important to highlight.

Oil prices are driven by three factors, namely supply, demand and market sentiment. A fall in oil supply will result in the price of oil moving up as by definition it becomes scarcer. Oil supply is linked to oil production, which means the events that could disrupt production will have a positive impact on the price. Similarly, it is linked to the movement of product, thus any event that may impact oil pipelines or seaborne movement will place upward pressure on the price. Higher oil production will push supply upward, driving down the price because the commodity is less scarce.

Demand for oil is driven by economic growth and technological change. Strong growth increases the demand for oil as it drives up energy requirements. A fall in economic growth reduces activity and therefore oil demand. Higher growth drives oil prices up and lower growth results in a decline in prices. As a major theme, technological change seems to be moving to reduce the world’s dependence on oil for growth, both from an energy generation perspective and in transport – where it remains the largest influence on fuel prices.

Market sentiment will dictate shorter-term price movements. This is usually related to the expectation of a possible change in the supply or demand dynamics for oil. For example, fears over lower economic growth due to the impact of COVID-19 prevention measures will have a negative effect on expected demand for oil, which will in turn result in the price falling. The Organisation of Petroleum Exporting Countries (OPEC) agreeing on production cuts or a difficult dictator in Libya blocking exports from certain ports will have a negative impact on supply prospects, which will result in the price rising.

There are many different oil price benchmarks across the world, but the two main oil prices quoted are the West Texas Intermediate Crude (WTI) oil price and the Brent crude oil price.

For illustrative purposes, the last and current contracts quoted for WTI are as follows:

Oil benchmark prices usually experience a smooth transition when moving from quoting one contract to the next – although an anomaly occurred last week. 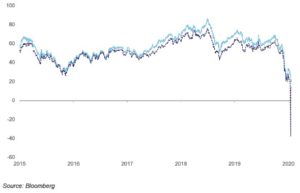 What happened to oil prices?

Oil prices almost simultaneously received a demand-side shock and a supply-side shock in February and March. The demand shock came in the form of the COVID-19 outbreak which led to the unprecedented lockdown or partial shutdown of all major economies globally. This resulted in oil demand falling sharply – as economic activity slowed, oil requirements came down sharply – particularly because people have stopped moving around. The supply shock came as a result of Russia and OPEC failing to reach an agreement on reduced oil production in response to the fall in demand. Saudi Arabia decided to increase oil production in an effort to strong-arm the Russians and to a certain extent the US into a deal to cut supply. This resulted in what is termed a “supply glut”, due to an excessively abundant supply of oil. All this excess oil had to be stored somewhere and as countries kept producing oil at a high rate and demand continued to fall, storage capacity began filling up.

How is it possible for oil prices to fall below zero?

Not all oil prices fell below zero; what fell below zero was the NYMEX one-month futures contract for WTI oil that settled on 21 April. The NYMEX contract is different to Brent crude contracts as it requires that holders take physical delivery of the oil. Since there is very little storage space left for oil in the USA, the holders of the NYMEX one-month futures contracts for WTI oil would have had no place to store the oil once it was delivered. This resulted in an offloading of the contracts in the market on 20 April and, at one point, traders were willing to pay counterparties to take the contracts for delivery off their hands. The price returned to positive territory on 21 April as the June contract was then quoted.

Brent crude oil traded sharply down on the 20th but remained around the $20 per barrel mark. The main difference being that Brent crude oil rarely requires land transport and storage before being moved out to sea. Also, Brent crude oil contracts can be settled in cash, which means that holders of these contracts do not face the same dilemma as is the case with WTI.

Low oil prices are generally regarded as positive for consumers because this translates into lower transport costs. It is also positive for oil-importing countries, like South Africa, from a trade balance perspective and therefore may have a positive impact on their currencies and economic growth. Lower transport prices and a stronger currency could translate into a more benign inflation profile, which will in turn allow central banks to keep interest rates lower for longer – another positive for consumers.

Low oil prices are regarded as negative for oil-exporting countries. Lower royalty and tax revenue usually translate into less social spending, which is negative from a consumer perspective and bad for economic growth. In the case of oil-importing countries, the stronger currency resulting from lower oil prices will be bad for companies that export product into other markets. It also has a negative impact on companies whose product is tied to the price of oil.

So … What about Sasol?

Sasol is exposed to the Brent crude oil price because it is an important determinant in final selling prices that the company receives for its products. While refinery production has come down in line with a deterioration in demand, Sasol has hedged 80% of its production for the quarter to June at $32/barrel. At the current ZAR exchange rate this translates to about R600/bbl. Management has indicated that this business is profitable at around R520/bbl but this will exclude required capital expenditure. So for now, the company seems as if it will muddle through this quarter but, as with most oil-exposed companies, oil prices will have to recover meaningfully to ensure longer-term profitability.

Where do we see oil prices going in future?

Oil prices will remain volatile over the next few weeks as uncertainty around the depth of the demand shock following COVID-19 interventions and supply-side negotiations remain erratic. The oil price will only recover sustainably once there is a clearer view of when economic activity will normalise (when lockdown and social distancing measures will end) or OPEC, Russia and the US agree on further supply cuts. While the demand side of the equation remains unclear, we have seen some movement on the supply side. US oil rig counts are already going down and, after agreeing to an initial cut of 10 million barrels per day, it seems that OPEC, Russia and the US are in talks for further production reductions. US shale companies are running losses and most oil producing nations are running large budget deficits at these levels. There is further upside risk in the form of renewed geopolitical tension in the Middle East – which has been a major source of oil price support for decades.